The remarkable group of Rembrandt paintings in Southern California museums, representing nearly every phase of the artist’s long and productive career, offers a rich opportunity to consider some of the key facets of his intriguing working method.

Rembrandt revitalized the traditional practice of portraiture by infusing his likenesses with a greater plastic or sculptural quality, the suggestion of animation, and far greater immediacy than his predecessors. His exploration of physiognomy, often through tronies, or character studies from life (see nos. 3 and 4), and self-portraits (such as no. 12 in the virtual exhibition) prepared the way for his future innovations in portraiture and multifigure historical subjects. Portraiture was the most lucrative aspect of his work—particularly at the outset of his career in Amsterdam—serving not only to attract new clients but also patrons for larger civic projects, such as group portraits. His early patrons included associates of the art dealer Hendrick Uylenburgh, with whom Rembrandt established his Amsterdam studio. Marten Looten (no. 9) was a member of the conservative Mennonite community, as was Uylenburgh, while Pieter Sijen (the possible sitter of no. 11) lent Uylenburgh money. Other patrons were the leading merchant and explorer Jacques Specx, who likely owned The Abduction of Europa (no. 5). Dirck Jansz. Pesser (no. 10) and the richly attired, unknown Man Holding a Black Hat (no. 1) attest to Rembrandt’s fame, which brought clients from other cities, including Rotterdam, and prominent visitors to his studio

In portraits, important indicators of status, such as a sitter’s costume, were carefully rendered. The play of light on fabric, even a dark material such as the cloak worn by Marten Looten (no. 9), was essential for suggesting volume. Projecting elements such as hats (whose contours almost always show slight corrections by the artist), along with the arcing curves of white ruffs created from grays and beiges and outlined with sinuous strokes, also contribute to the sense of volume and animation. 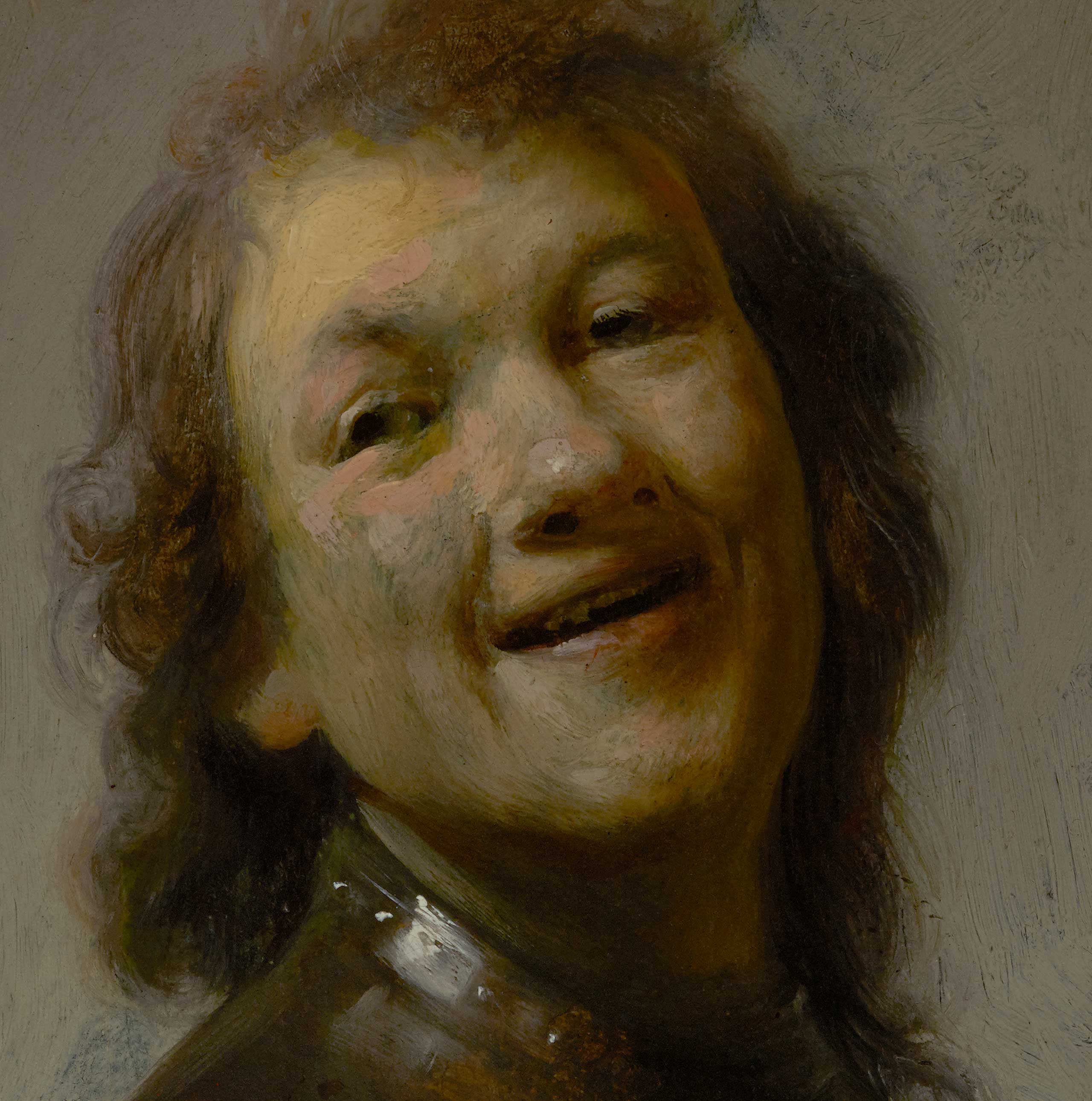 Rembrandt Laughing (detail of no. 3). The J. Paul Getty Museum 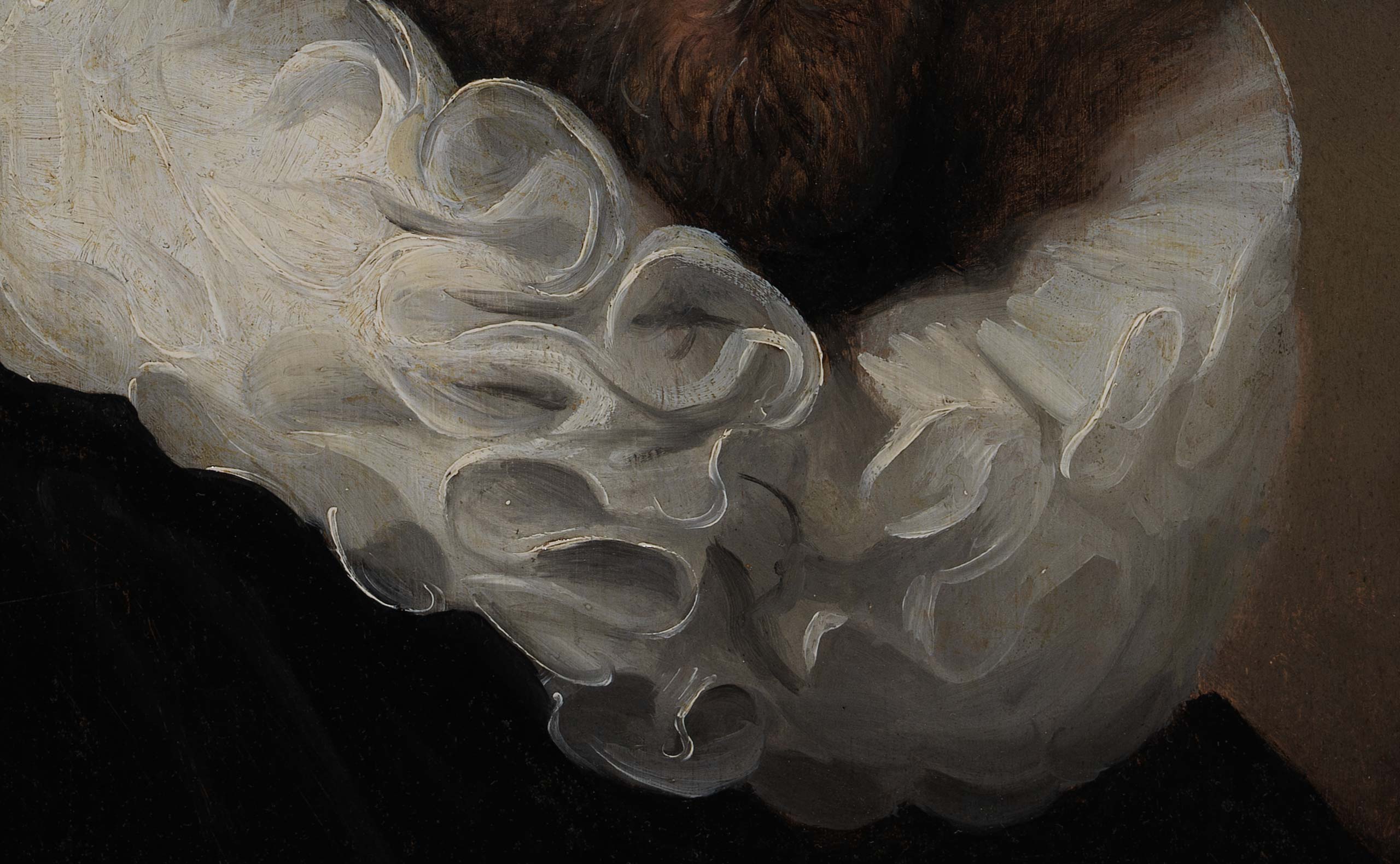 Rembrandt placed the greatest emphasis on the faces of his subjects. In his early studies, such as An Old Man in Military Costume (no. 4), he strove to create dramatic areas of light and shade across the countenance of his sitter as well as a sense of atmosphere around the head. Rembrandt evidently relished the challenge of creating the transition to shadow on the far side of the face, and even the effect of atmosphere around a head (compare, for example, the cool atmosphere around the old man (no. 4) and Marten Looten (no. 9) and the delicate illumination surrounding Dirck Jansz. Pesser (no. 10)). Areas in strong light are generally more thickly painted, while those in shadow are more thinly executed. By employing the subtle technique of using radiating brushstrokes in the neutral background around the head and shoulders (clearly visible when viewed from a slight angle), Rembrandt effectively made the head of his subject more prominent. This approach is most visible in Portrait of Marten Looten (no. 8) and in Portrait of a Bearded Man in a Wide-Brimmed Hat (no. 11.)

A close look at the portraits reveals how subtly Rembrandt maneuvered individual features, creating a series of imbalances that resolve into a convincing likeness: often one eye is higher than the other and differs in size. Slight variations in the color of the pupil and the size of the iris allow the eye to recede slightly. A thin, pale beige stroke suggests moisture (see, for example, Portrait of a Bearded Man in a Wide-Brimmed Hat, no. 11; Portrait of Dirck Jansz. Pesser, no. 10; and Portrait of a Man Holding a Black Hat, no. 1). Later portrayals of historical and religious figures, such as Juno (no. 2) and Saint Bartholomew (nos. 7 and 14), were probably inspired by contemporary men and women with whom Rembrandt was acquainted. In these late works, Rembrandt allowed the dark underlayer from the earliest stages of painting to remain visible, contributing to the appearance of the eye situated within the socket. 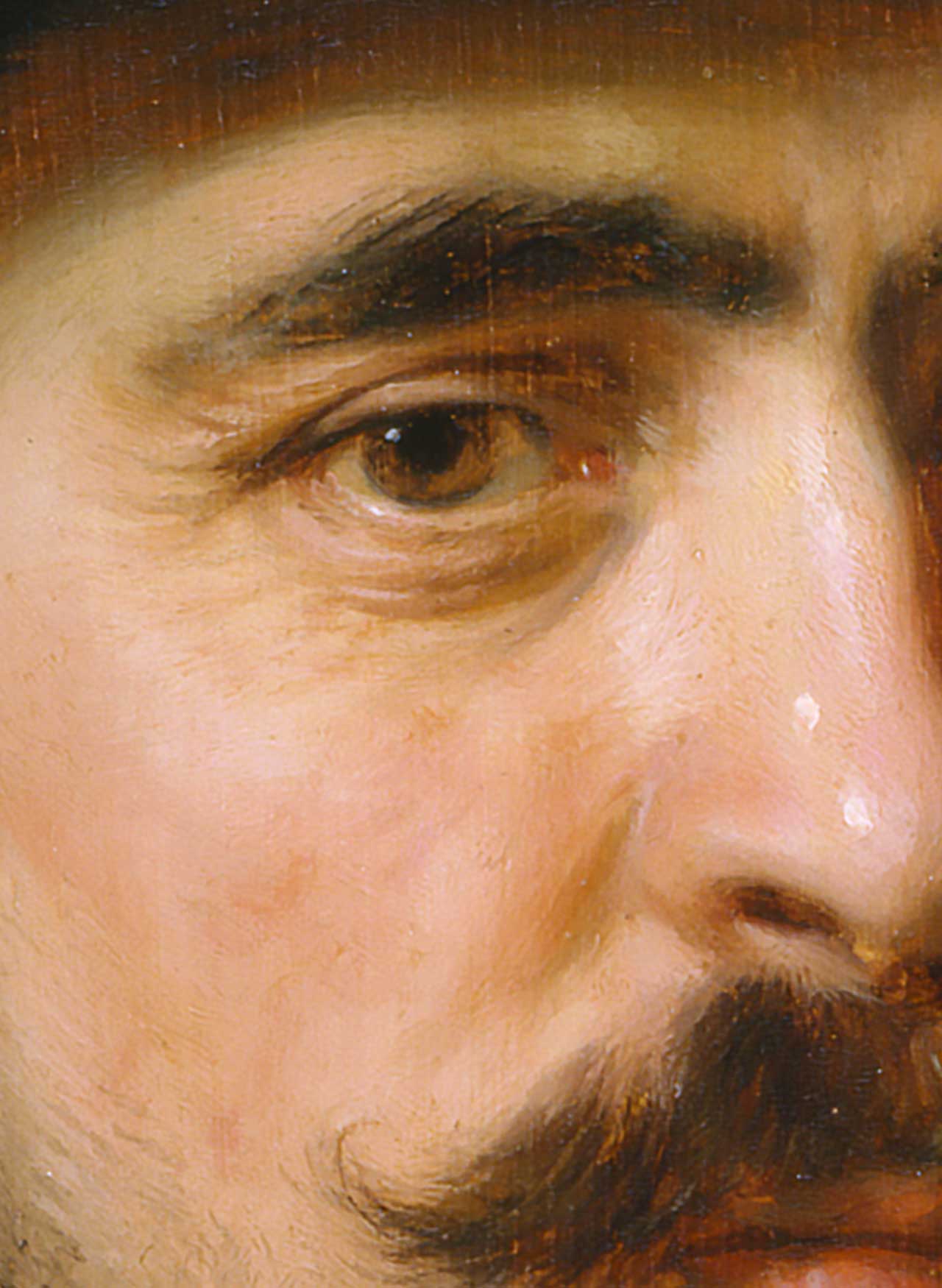 A small amount of white suggests moisture at the rim of the eye in Portrait of a Bearded Man in a Wide-Brimmed Hat (detail of no. 11). Norton Simon Art Foundation, Pasadena 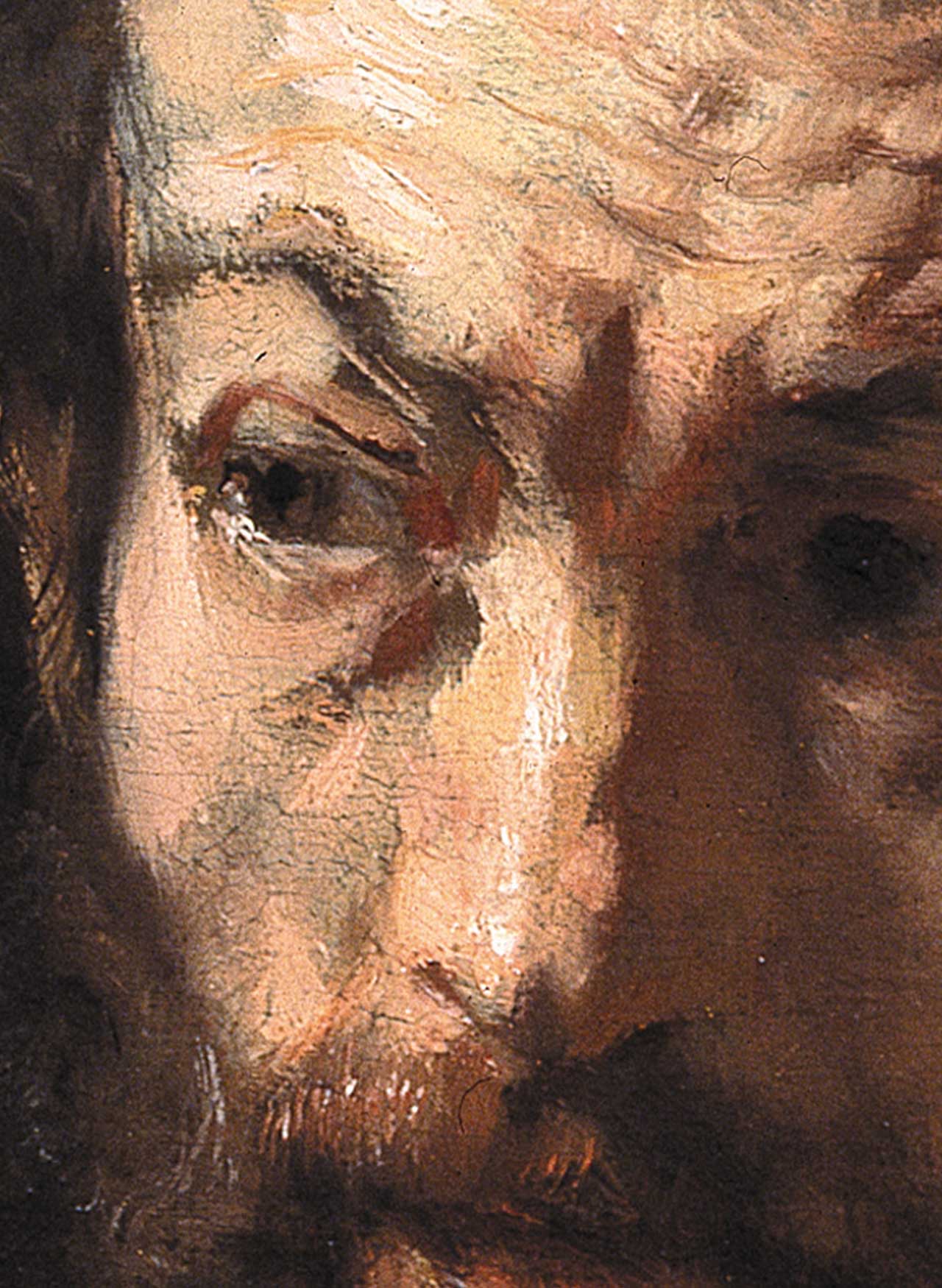 Rembrandt used traditional materials, sometimes in surprising ways, to create striking visual effects. Innovative and spontaneous, the artist’s brushwork reveals the speed with which he applied the paint as well as his changes and corrections during the execution of a work. Particularly in his early career, Rembrandt utilized oak panels, a traditional support for northern European artists that served to highlight his fine brushwork and jewel-like palette. For example, he used a single, wide, radial-cut plank for The Raising of Lazarus (no. 8). Throughout his career, but particularly before about 1632, Rembrandt repurposed his supports, abandoning compositions in order to paint new ones. A multi-figure scene lies beneath Rembrandt Laughing (no. 3), and he reused an oak panel upon which he had already started a male portrait by turning it 180 degrees before painting An Old Man in Military Costume (no. 4).

Rembrandt also purchased canvas in standard widths. While oval formats were popular for bust-length portraits in the 1630s—he used one for Portrait of Dirck Jansz. Pesser (no. 10)—they were also in style during the 1700s, when rectangular Dutch portraits of the previous century were cut into oval shapes. It is sometimes difficult to determine with certainty the original shape of a portrait (for example, Portrait of a Bearded Man in a Wide-Brimmed Hat, no. 11).

Rembrandt occasionally allowed the preparatory, or ground, layer to show through in certain areas, making use of its color. The salmon-tinted layer is visible in the right ruff of Portrait of a Bearded Man in a Wide-Brimmed Hat (no. 11). Somewhat unusually, the area left in reserve for the right edge of the hat brim was left uncorrected after the artist reduced the extent of the brim. Although secondary in importance to the face, the visual weight and distribution of the body were important aspects of the portrait. 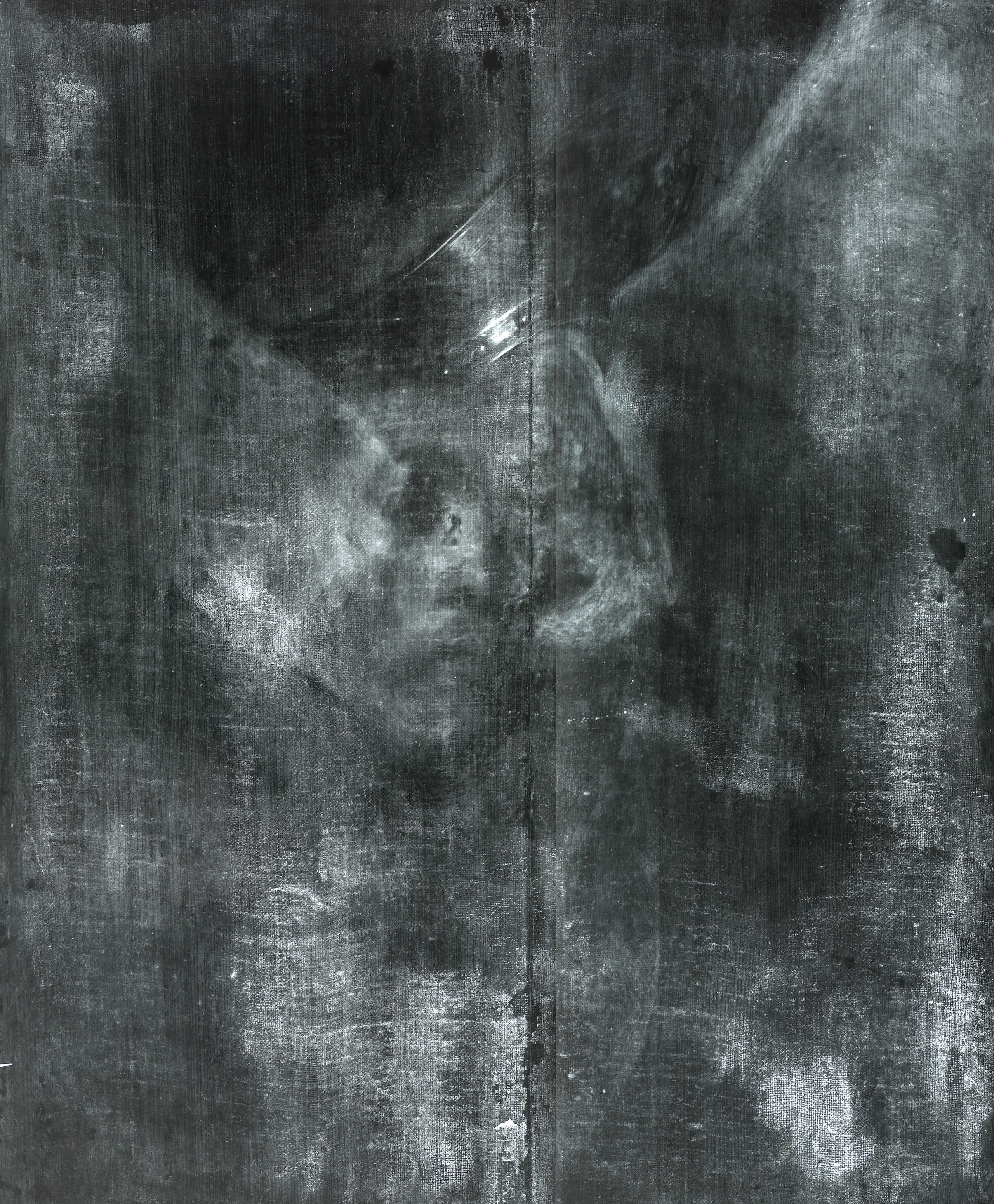 Rembrandt frequently adjusted the contours of the shoulders of his sitters, as in An Old Man in Military Costume (no. 4) and his own Self-Portrait (no. 12). Sometimes he made dramatic changes to a composition, as in The Raising of Lazarus (no. 8), the extent of which is only visible though technical means, such as X-radiography. Other adjustments, known as pentimenti, are more obvious: for example, he extended the tip of his sitter’s right thumb in Portrait of Marten Looten (no. 9), altered the contours of his cloak along the right side, and modified the drapery of the lower arm. Rembrandt worked on some paintings over the course of a few years. During the execution of Juno (no. 2), perhaps in response to the demands of his patron, he converted the goddess’s right arm from a downward position resting on a table or ledge (as on the left), to rest commandingly on a scepter.  The remainder of the red cloth on the table that originally extended across the front of Juno (no. 2) can still be seen. 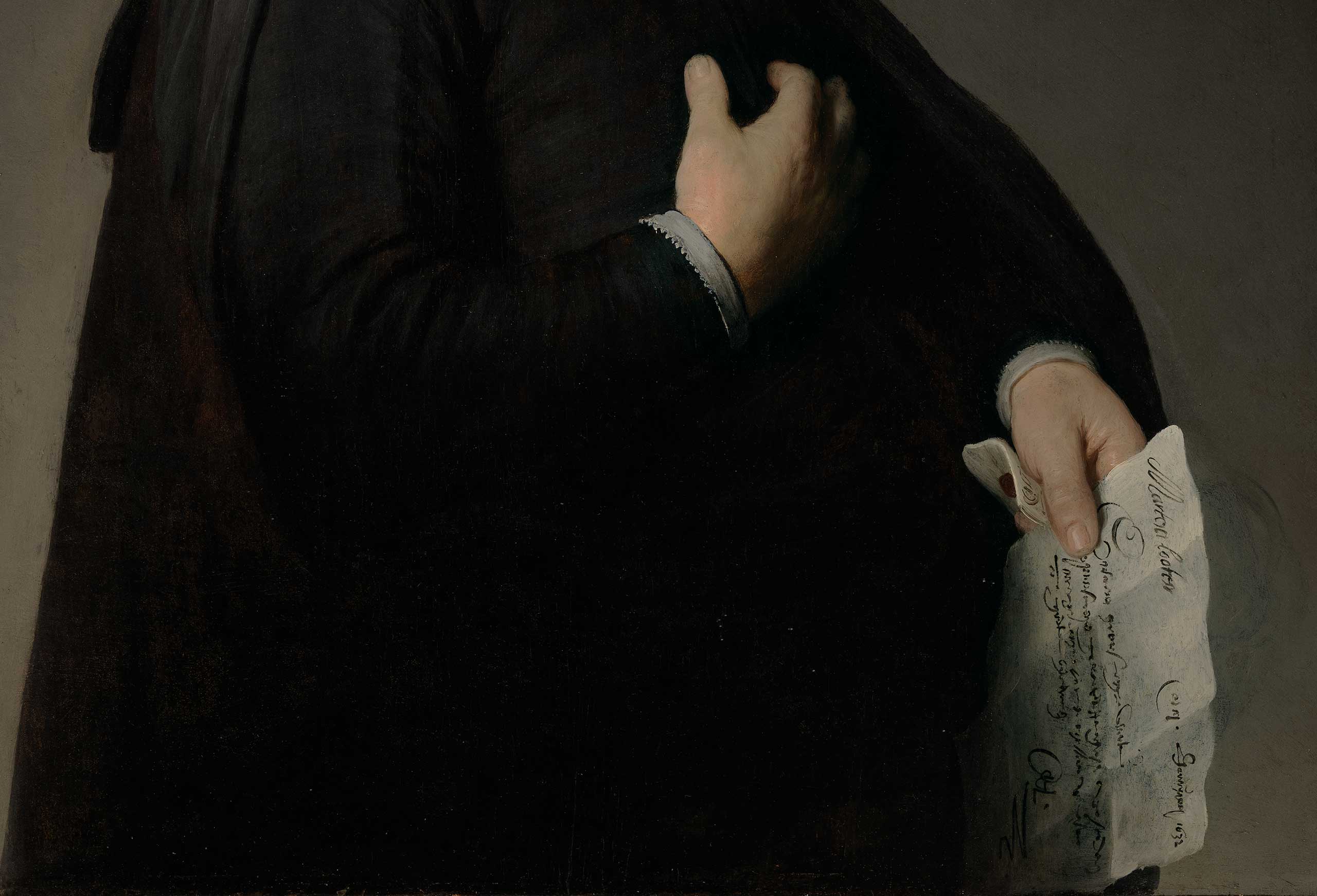 Paint: Gouging and the Rough Manner

From the beginning of his career, Rembrandt paid particular attention to texture and the quality of paint. Among his works in Southern California are a number of good examples of the often-imitated practice of gouging in the wet paint with the wooden end of the brush. He used this technique sparingly, such as in the tip of the feather in An Old Man in Military Costume (no. 4) and in the head and shoulder of Portrait of a Man Holding a Black Hat (no. 1), or where he sought to create sophisticated light effects.

In The Raising of Lazarus (no. 8) gouging is evident in the face of one of the kneeling men and was used to create the stringy foliage near Christ. The artist often juxtaposed different types of brushwork in adjacent areas. This is evident throughout The Abduction of Europa (no. 5), in which he employed slightly textured and smooth applications of paint. However, it is clearest in late works such as the portrayals of Saint Bartholomew (nos. 7 and 14), where the thick and roughly painted faces contrast with the much more thinly or summarily painted torsos.

Rembrandt painted his apostles and evangelists in what his contemporaries called the grof manier, or rough manner. The expression was used by artists and critics alike to refer to the visible brushstroke, a dynamic and virtuoso technique, and a surface that was best seen from a distance. The broad and quite varied handling of his late style, however, was distinct from the elegant, polished style preferred by Amsterdam’s elite around 1660. Committed to his singular artistic vision, Rembrandt continued to explore the scope of a rough and varied surface through the final years of his life, pushing the expressive possibilities of paint to its most evocative ends. 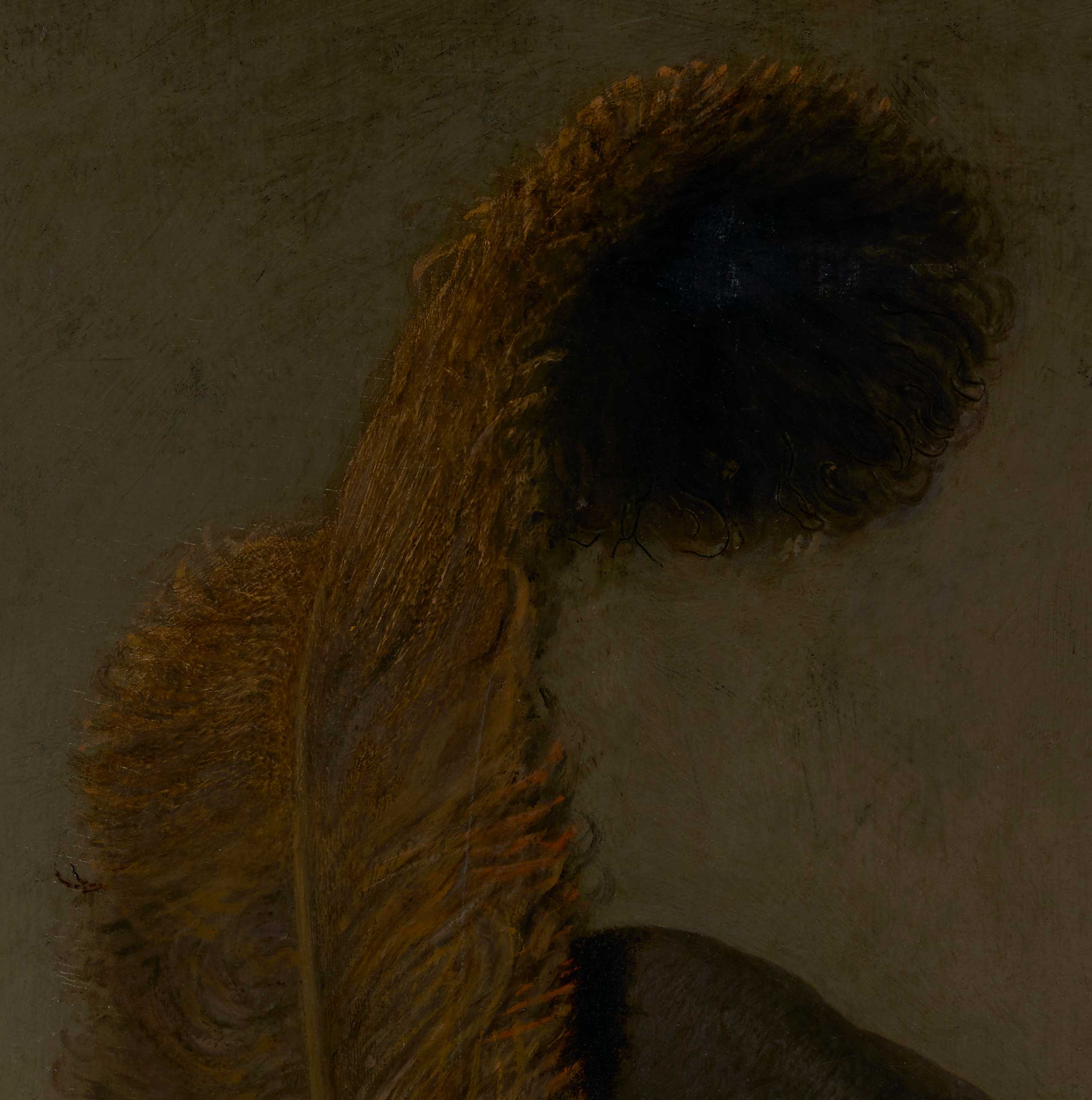 Rembrandt probably used the wooden end of his brush to gauge into the wet paint, creating texture in the tip of the feather in An Old Man in Military Costume (detail of no. 4). The J. Paul Getty Museum 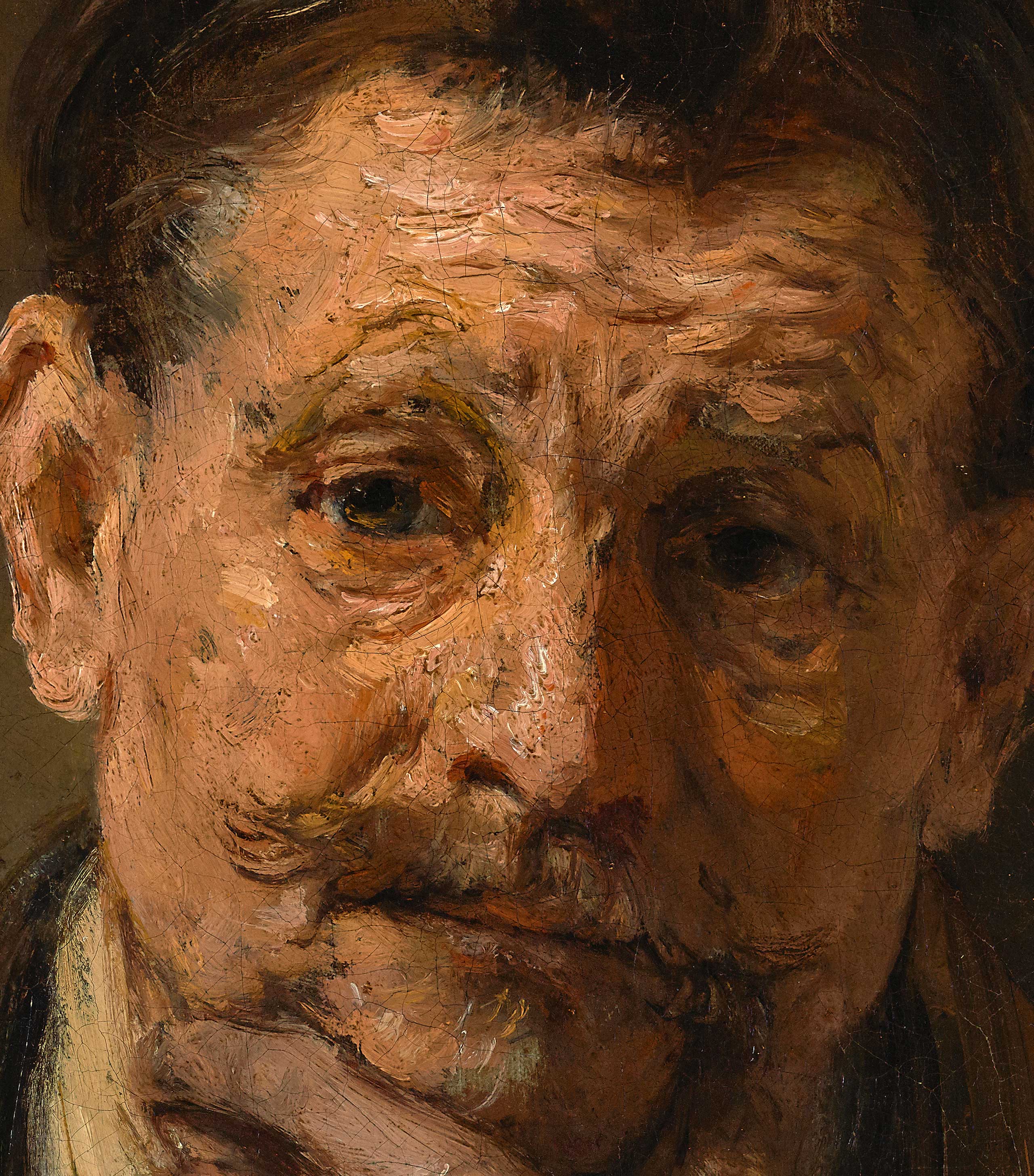 Anne joined the Getty Museum in 1998 and specializes in Flemish, Dutch, and German painting before 1800. She received her Ph.D. from Columbia University, and her research interests include the works of Rubens and Rembrandt, collaboration in painting, collecting Netherlandish art in the Western United States, and the technical study of works of art.